D.S. Martin is a Canadian poet with four collections to his credit. His latest book, Ampersand, appeared in 2018 from Cascade Books, as part of the Poiema Poetry Series. His previous books include Conspiracy of Light: Poems Inspired by the Legacy of C.S. Lewis, Poiema, which was a winner at the Word Awards in 2009, and his chapbook, So The Moon Would Not Be Swallowed, published by Rubicon Press (Edmonton) in 2007.

D.S. Martin is Series Editor for the Poiema Poetry Series from Cascade Books. He is honoured to have had the opportunity to edit these, and dozens of other collections, along with these fine poets. Visit Cascade Books at this link: A little of what I’m up to lately…

Keep an eye on this column for upcoming conference appearances or readings.

As we climb out from under pandemic restrictions, please feel free to contact D.S. Martin, to book appearances.

He will be the in-person keynote speaker at the 2021 Fall Conference of the Inscribe Christian Writers' Fellowship, October 1 & 2, at the Providence Renewal Centre in Edmonton, Alberta.

In his role at McMaster Divinity College he often shares his poetry as part of chapel services. He recently shared a video presentation of one of his poems for a virtual chapel.

The Poiema Poetry Series Reading at the Prince Center in Grand Rapids, Michigan (that was booked for the Friday of 2020's Festival of Faith & Writing) will be rescheduled for 2022. The new conference dates are March 24-26.

The following promotional poster is from a reading at Redeemer University in Ancaster, Ontario. 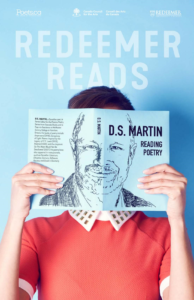